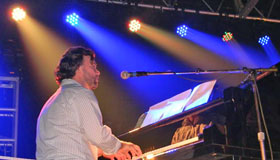 Join us for the album release! Show starts at 9 pm.

Dubbed a “master keyboard player” by Honest Tune magazine, Jimmy Landry grew up in Kinston, North Carolina where he studied classical piano and theory for four and a half years. He earned Superior Plus ratings from the Guild during this time, but classical music was not what he wanted to play. After a several year hiatus from piano, Landry purchased a keyboard while serving in the US Army. Upon receiving his Honorable Discharge, Landry attended Georgia Southern University where he completed his Bachelor’s Degree. While at GSU, he played with his first band. This was the start of a brand new experience for him. A year later, he was playing with five different bands and doing solo shows as well.

After a move to Asheville, a master’s degree at East Carolina University, a trip to Korea, then back to Asheville, Landry had joined up with the Lefty Williams Band after seeing them play one night and sitting in with them two nights later. A year and a half later, Landry recorded his first album New Day produced by the legendary John Keane in Athens, GA. The cd broke into the top 20 reaching #18 on HomeGrown Music Network’s radio charts and held the #1 spot for an unprecedented two weeks on WildmanSteve Radio.

Landry’s music is heavily influenced by piano greats such as Bruce Hornsby, Billy Joel, and Elton John combining“pop sensibilities” with “wonderfully funky” melodies to provide the listener with a truly enjoyable experience.The bluesy, soulful style of bands like the Black Crowes is easily heard as well as the grooving riffs of bands like Widespread Panic and Phish while maintaining an original sound throughout Landry’s music.With his years of classical training as well as having studied jazz under Tom Coppolla, who played the likes of Marvin Gaye and Paul Simon as well as writing music for Saturday Night Live, Landry brings a knowledge of jazz, blues, classical, and funk that combines to bridge the gaps often left behind by other artists.

Landry resides in Charleston, SC and focuses mainly on his original music. He can also be seen performing with many different bands ranging from tributes to Grateful Dead, Phish, and Widespread Panic to cover bands playing a wide variety of styles.