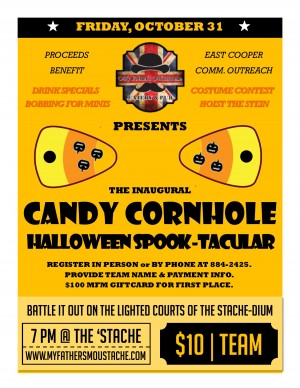 My Father’s Moustache, East Cooper’s pub of choice, will host the inaugural Candy Cornhole Halloween Spook-tacular on Oct. 31. The event will take place under the lights at the Stache-dium, MFM’s lighted cauldron of recreational competition.

“It’s going to be a terrifyingly good time,” said My Father’s Moustache owner Rob Walker. “The Spook-tacular will be a great way for everyone to kick off the night.”

Non-profit partner ECCO is an ecumenical organization dedicated to helping its neighbors in need and providing a broad range of emergency disaster relief primarily East of the Cooper.

“We’re glad My Father’s Moustache thought of ECCO when looking for a non-profit to work with on this event,” said Alana Morrall, ECCO’s director of business development and marketing. “It’s scary to think how much good we can do together.”

The cornhole tournament will be the Stache-dium’s official christening. In addition to two cornhole/bocce courts, MFM has further augmented its patio for Fall 2014 by installing three massive, lighted European market umbrellas, along with an all-weather bar and more seating.

My Father’s Moustache is located at 1045 Ben Sawyer Boulevard in Mount Pleasant. To learn more, visit the all-new www.myfathersmoustache.com. The Stache is also on Facebook at facebook.com/myfathersmoustache and Twitter @myfathersstache.